My son, Harry, asked me the other day “Dad, what is a rainbow?” and it made me think about how incredible rainbows are…

What is a rainbow? How are they formed?

A rainbow is a multi-coloured arc made by light striking water droplets. Rainbows become visible when the light strikes the raindrops at a precise angle, and this is when you get to see the magic!

They always appear in the same order: red, orange, yellow, green, blue and violet. If you are near a body of water such as a waterfall, which sprays a lot of water, you will likely see a lot of rainbows here.

You may be thinking…so how does this relate to optometry in any way? There is correlation so keep on reading to find out.

Rainbows are the result of the refraction and reflection of light (our eyes go through the same process). Both of these are phenomena that involve a change in a wave’s direction. A refraction wave may appear “bent”, while a reflected wave might seem to “bounce back” from a surface or other wave front. This work’s the same way with prism lenses, which are used to correct double vision.

What are prism glasses?

A prism lens added to eyeglasses bends light before it travels through the eye. The light is redirected to the right place on the retina in each eye. The brain then fuses the two images together to produce one, clear picture. Prism glasses are primarily used for individuals who experience double vision or other conditions like a head injury, stroke or even diabetes. 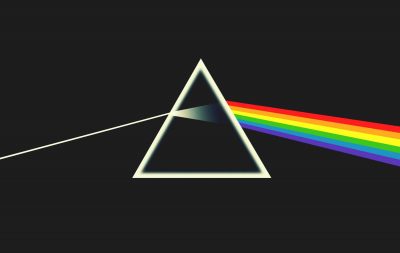 Adding prisms to lenses will fix:

It is incredible to see the use of a natural miracle be used in a scientific way to benefit humans and their eyes.

If you have any of the symptoms listed above, book in for a neuro exam. There is a chance you may need prism glasses and your eyes will appreciate the assistance. For more information on neuro appointments please visit this link

How do we see all the colours?

White light is how our eyes perceive all the colours of the rainbow mixed together. Sunlight appears white.

When sunlight hits a rain droplet, some of the light is reflected. The electromagnetic spectrum is made of light with may different wavelengths, and each is reflected at a different angle.

What are the different types of rainbows?

This occurs when a second rainbow is seen above the primary rainbow (usually more faint). They are caused by light being reflected twice inside the raindrop. As a result of this second reflection, the spectrum of the secondary rainbow is reversed: red is on the inner section of the arch, while violet is on the outside. 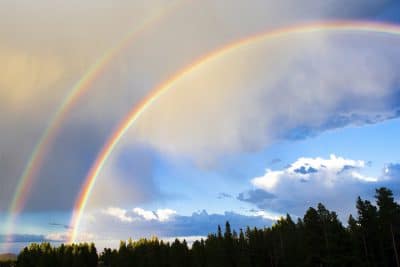 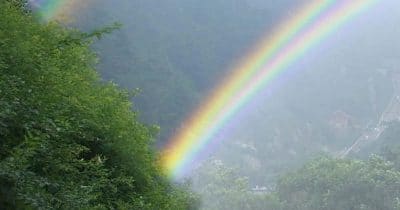 Rainbows are actually full circles, however there is an obstruction whether it be land or buildings that prevent us from seeing the full rainbow. Pilots have often stated that they have witnessed this phenomenon whilst flying. 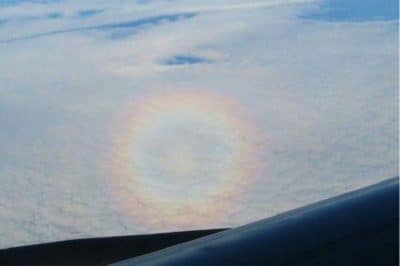 A moonbow – also called a lunar rainbow – is a rainbow produced by light reflected by the moon. The moon itself does not emit light, as moonlight is reflected sunlight. Since it is much fainter than sunlight, the lunar rainbow is generally quite dim. 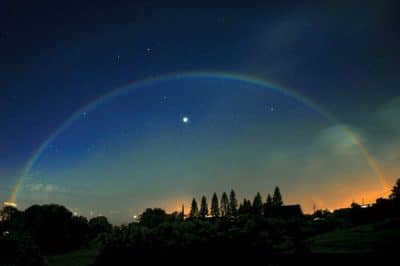 A fogbow is formed in the same way as a primary rainbow. Light in a fogbow is refracted and reflected by fog (water droplets suspended in air). A fogbow seen in the clouds is known as a cloud bow. 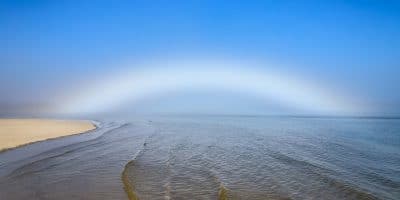 Rainbows are apart of myth in many cultures in the world. They are often portrayed as bridges between people and supernatural beings. In the ancient beliefs of Japan and Gabon, rainbows were the bridges that human ancestors took to descent to the planet.

Why do rainbows make us happy?

Since they represent ‘good luck’, we automatically see the colours and believe something good will happen to us. Rainbows are usually positive symbols and they sure are pretty to look at! They can boost happy thoughts as well as a variety of mixed emotions if there is any value or symbolic meaning attached. It also promises sunshine after rain.

So, can you get to the end of the rainbow?

This of course, is also a myth, although it may be fun to become a ‘rainbow chaser’ and find that pot of gold at the end of the rainbow (such as the Irish tale goes). At least we can appreciate this epic phenomenon whenever it appears in our sky.

If you are experiencing double vision or other symptoms, book an eye test with Dr Paul Fotkou to determine your need for prism lenses.